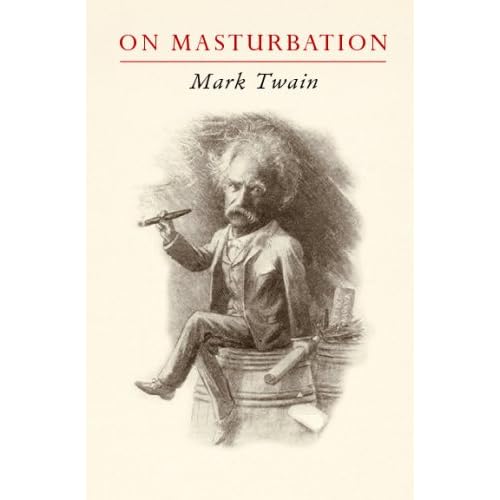 Caesar, in his Commentaries, says, "To the lonely it is company; to the forsaken it is a friend; to the aged and to the impotent it is a benefactor. They that are penniless are yet rich, in that they still have this majestic diversion." In another place this experienced observer has said, "There are times when I prefer it to sodomy.

Robinson Crusoe says, "I cannot describe what I owe to this gentle art." Queen Elizabeth said, "It is the bulwark of virginity."

Cetewayo, the Zulu hero, remarked, "A jerk in the hand is worth two in the bush."


Michelangelo and all of the other old masters--"old masters," I will remark, is an abbreviation, a contraction --- have used similar language.  Michelangelo said to Pope Julius II, "Self-negation is noble, self-culture beneficent, self-possession is manly, but to the truly great and inspiring soul they are poor and tame compared with self-abuse."  Mr. Brown, here, in one of his latest and most graceful poems, refers to it in an eloquent line which is destined to live to the end of time--"None knows it but to love it; none name it but to praise."

Such are the utterances of the most illustrious of the masters of this renowned science, and apologists for it.  The name of those who decry it and oppose it is legion; they have made strong arguments and uttered bitter speeches against it --- but there is not room to repeat them here in much detail.  Brigham Young, an expert of incontestable authority, said, "As compared with the other thing, it is the difference between the lightning bug and the lightning."  Solomon said, "There is nothing to recommend it but its cheapness."  Galen said, "It is shameful to degrade to such bestial uses that grand limb, that formidable member, which we votaries of Science dub the Major Maxillary --- when they dub it at all --- which is seldom,  It would be better to amputate the os frontis than to put it to such use."

The great statistician Smith, in his report to Parliament, says, "In my opinion, more children have been wasted in this way than any other."  It cannot be denied that the high antiquity of this art entitles it to our respect; but at the same time, I think its harmfulness demands our condemnation.  Mr. Darwin was grieved to feel obliged to give up his theory that the monkey was the connecting link between man and the lower animals.  I think he was too hasty.  The monkey is the only animal, except man, that practices this science; hence, he is our brother; there is a bond of sympathy and relationship between us.  Give this ingenuous animal an audience of the proper kind and he will straightway put aside his other affairs and take a whet; and you will see by his contortions and his ecstatic expression that he takes an intelligent and human interest in his performance.

The signs of excessive indulgence in this destructive pastime are easily detectable.  They are these: a disposition to eat, to drink, to smoke, to meet together convivially, to laugh, to joke and tell indelicate stories--and mainly, a yearning to paint pictures.  The results of the habit are: loss of memory, loss of virility, loss of cheerfulness and loss of progeny